With the drop in demand for oil brought about by COVID-19 and the subsequent decline in oil prices, many operators are faced with the challenge of shutting-in their wells to await a draw down of storage and restoration of prices to pre-COVID 19 levels. The decision to shut-in a well is guided primarily by economic and legal factors regarding lease obligations. Beyond these primary factors, considerations in candidate selection for shut-ins should maximize the future profitability of the asset by:

This blog post will utilize Revo’s extensive experience of analyzing production data in all major shale plays, as well as a review of literature, to show variables that should be considered when selecting shut-in candidates.  As with any phase in the well’s life collecting good data before, during, and after shut-ins increases the understanding of well performance and helps to identify operational practices that maximize asset value.

Revo’s proprietary workflows for data quality control are used to ensure that the measured rates and pressures are representative of the reservoir response, rather than measurement artifacts.  After confirming that measured rates and pressures are a reservoir response, a model is matched to the transients introduced into the reservoir before and after the shut-in, as well as to the final transient of the test to evaluate the well’s performance as demonstrated by Crafton (1998).

Fig. 1 shows an example of a performance evaluation of well transients created before and after a shut-in. The different colored bars at the bottom of the production history plot (left) represent transients created by each choke change. The 20/64” choke setting has more than one transient, hence the a, b and c suffixes. The model match to the final (green, 20c) transient is shown on the right side of Fig. 1.

Fig. 1 Diagnostic analysis comparing well performance before and after a shut-in.

Table 1 summarizes the apparent system fracture half length (xf) values from model matches to the individual transients in Fig. 1. In this example the xf value after reopening the well was increasing. If the xf value continues to increase and ends up being equal to or higher than the maximum value prior to the shut-in, we’d conclude that performance was either similar or increased compared to before the shut-in. In contrast, if the xf value at the 20c transient is the maximum value, we’d conclude that the well’s performance decreased due to the shut-in. 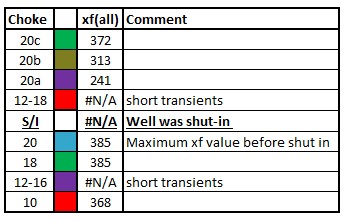 After a review of the available material on OnePetro and our internal database, we’ve found the following mechanisms to be the primary cause of decreases or increases in well performance from shut-ins.

Aggressive draw down and stress cycling that might be encountered when shutting wells in and bringing them back online can decrease well performance by reducing near well bore connectivity. Robinson (1988) discussed how proppant conductivity damage can significantly reduce well productivity and concluded that this can be caused by flowing a well too aggressively during production. Crafton (2013) concluded that a pressure decline exceeding 100 psi/day resulted in a decrease in well performance due to stress sensitivity of the proppant bed. Duenckel (2017) observed in laboratory tests that stress cycling reduced proppant pack conductivity and well performance.

Crafton (1998) concluded that shut-ins are harmful both early during the well’s life and after many years of production.  The proposed damage mechanism is the inefficient displacement of water by hydrocarbons after wells are reopened following a shut-in. Gravity segregation occurs when wells are shut-in, causing water to fill up the bottom of the fracture. When the well is reopened, hydrocarbons remain at the top of the fracture, and the water at the bottom is not displaced, therefore reducing the fracture surface area connecting the well to the reservoir and resulting in a decrease in reservoir performance.

The displacement of water from a fracture in low permeability reservoirs is dominated by capillary and gravity forces, rather than viscous forces (Barree 2003, Barree 2005, Barree 2015, Barree 2016). With relatively low viscous forces compared to capillary and gravity forces, reopening the well could result in the gravity segregated water occupying more of the fracture surface area than if the well was not shut-in.  Furthermore, imbibition of water into the matrix could result in clay swelling and could be a source of formation damage.

Highly desiccated reservoirs have been shown to have improvements in well performance due to shut-ins. The gravity segregated water in the fractures is imbibed and dissipated deeper in the reservoir matrix, away from the fracture face, and the resulting pressure drop due to imbibed water at the fracture face is diminished in contrast with less desiccated reservoirs. This study was specific to the Marcellus, but concluded that the same imbibition mechanism could be at play in other unconventional basins that are highly desiccated and have a low clay content (Yaich, 2015).

The negative effect of gravity segregation will be more pronounced in laterals that are drilled toe down, and wells where fractures propagate downwards, whereas, wells in desiccated reservoirs may benefit from shut-ins.

In some areas Revo has observed a negative correlation between shut-in duration and well performance (longer shut-ins correlate with decreased long term performance) as shown in Fig. 2. However, other variables such as the opening sequence of the wells, interference and communication can influence well performance during and after shut-ins and should be considered when wells are shut-in and reopened. 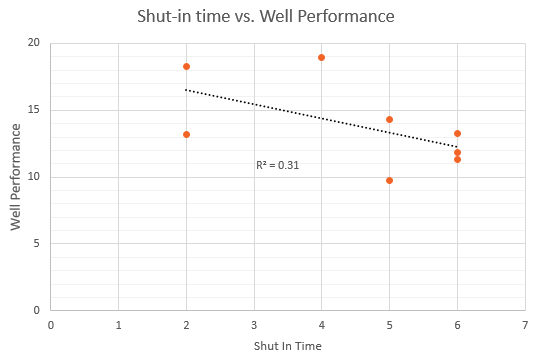 We have also observed a strong negative correlation between water production on a pad, and well performance. If poorer producers on a pad are shut-in, water could start flowing in the direction of the producing wells, and possibly reduce their performance if there is pressure communication between the wells. Well histories (faults, frac hits, pressure communication) should be reviewed to confirm hydraulic isolation. If any wells are to be kept open, priority should be placed on hydraulically isolated wells to mitigate the risk of water influx. Furthermore, pressure distribution across pads and hydraulic communication should also be considered when wells are to be reopened. Lower pressure wells on a pad should be reopened first to maximize the energy available to aid in clean up of any water that has settled in fractures or the toe of the well in toe down completions.

Communication and interference can also be monitored while wells are shut-in. With this in mind, wells with down hole pressure gauges or artificial lift (ESP, Jet Pump) may be good candidates for shut-ins.  If the shut-in data is not distorted by interference from offsets, it effectively becomes a build-up test. Due to the low permeability of unconventional reservoirs, pressure build-up tests take too long to be practical. However, with the potential for wells to be shut-in for several months, build-up test data may yield useful analysis.  Build-up tests can be used to validate estimates of hydrocarbons in place, fracture half-length, permeability, and estimate the average reservoir pressure.

The literature review indicates that shut-ins can be harmful both early in the well’s life and after many years of production. In contrast, improvements in performance have also been observed following shut-ins. The Revo Engineering Team has also observed many instances in which no losses in performance occurred due to shut-ins. Well communication and interference influence well performance before, during, and after shut-ins and must be taken into account.   Additional variables such as the timing and duration of shut-ins, number of shut-ins (stress cycling), gravity segregation and imbibition, well configuration (toe up, toe down), fracture height growth (up, down), reservoir desiccation, clay content, and the use of surfactants to reduce IFT should also be utilized in determining your shut-in strategy. The large number of variables at play effecting well performance post shut-in may result in a wide variety of outcomes for wells.

The major points we have outlined in this blog should be used when selecting candidates for shut-in. In addition, continuous monitoring of well performance and good data quality are required to prevent ambiguities masking well performance during and changes after shut-in. Good data allows operational practices to be correlated with well performance, and ultimately optimizes asset value when best practices are identified. Shutting in wells with downhole pressure gauges to collect information to characterize the reservoir and monitoring of producing wells for possibility of interference and communication should be part of a good shut-in strategy.

Contact Revo Testing Technologies for more information on candidate selection for shut-ins, well performance assessment before and after shut-ins, and Pressure Transient Analysis of build-up data. 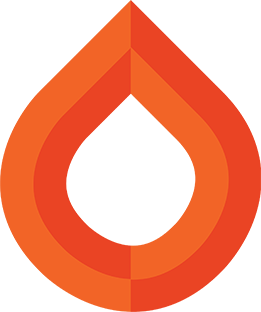 About the Author: Oladapo Adejare